What should America expect?

Michael Cantu is an aspiring automotive editor and photographer who has just moved to Los Angeles to pursue his passion of automotive journalism. Michael has taken a closer look to what the European & Amercian journalists reactions have been just before the first Mk3 Focus RS cars hit the American shores.

What is everyone saying so far?

Within the past three years, Ford Performance has come out with the most advanced and track-focused sports cars (and truck) they have ever made. Ford continues to shock the world with highly capable sports cars and continues to build some of the funnest cars on the market. All this from a company that not only 5 years ago had a solid-axle Mustang as their top-of-the-line sports car. With the release of the Fiesta and Focus ST, the Mustang GT350R, the GT, and Raptor, it was only a matter of time Ford Performance came out with the next long awaited Focus RS.

The Focus RS will be released in the US later this year and has yet to be tested by the media on US soil. However, the RS was released to the press in Europe and there have been enough first-drives and comparisons to get a good idea of what to expect when we test it out here in the US. So far it seems everyone is loving it, but let’s first get a reminder of what Ford put into this crazy hot-hatch.

Ford Performance knew they had to pump out more power than their competition while still having enough to perform with vehicles above its price range. They decided to use the same engine you find on the EcoBoost Mustang but tweaked it for more power. With a whopping 350 hp and torque, the Focus RS leaves its direct competitors the STI, Golf R, and Civic Type-R, in the dust. A never-before-seen all-wheel-drive system is the pinnacle of this amazing sports car with a precise 6-speed manual as the only option for the transmission. Ford worked with the engineering company GKN on what they call the Torque Vectoring Rear Drive Module (RDM). It looks similar to a rear differential but has actuated clutches on each rear-wheel output allowing a dedicated computer to unlock and lock the clutches depending on the situation. This allows the RS to transfer up to 100% of the power sent to the rear wheels to either the left or right wheel within .06 seconds by opening one and locking the other clutch. The RDM can even de-clutch both rear wheels to improve fuel consumption during highway cruising. GKN also supplied the front Power Distribution Unit that allows 70% of the engine’s power to be sent to the rear wheels. They also assisted Ford with creating the RS’s four driving modes: Normal, Sport, Track, and Drift mode. Yes, Drift Mode! Recaro seats and large Brembo brakes are on the list of goodies, as well. The optional forged wheels and barely street-legal Michelin Pilot Sport Cup 2 tires are a must for maximum traction and fun. 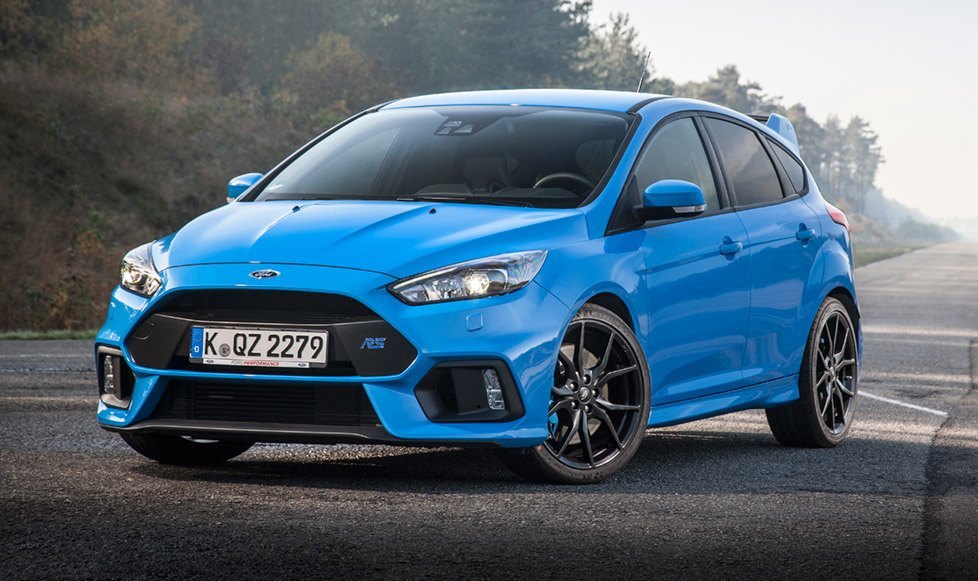 Motor Trend, Car and Driver, Road & Track, Autoweek, and Top Speed have reviewed the RS in Europe. For the most part, all editors only had great things to say about the Focus RS. They praised its power, speed, confidence-inspiring handling, the AWD system, but most of all, it’s FUN-TO-DRIVE FACTOR! American editors have been praising Ford for possibly making one of the funnest to drive hot-hatches ever! Many are claiming that this is the performance bargain of the decade! The car seemed to perform almost flawlessly whether on the road or track, wet or dry conditions, thanks in part to its selectable driving modes. The low-end interior and high seating position were the biggest, if not the only, complaints.

While in Europe, Car and Driver compared it to the Subaru STI and the Golf R. The Focus RS came in first place. They claimed it is by far the funnest car of the group with a very impressive powertrain and chassis. They felt the STI was outdated and the Golf R is a little underwhelming. The Focus RS logged the fastest numbers of the group but not by much considering the power advantage. TopSpeed had a very similar conclusion when it put the RS against the Golf R in Europe.

Ford first released the Focus RS to the European press because it will be built in Europe (Germany) and in the past the RS has only been offered in Europe, unlike this model that will be offered globally. The former RS generations are legends in Europe while they are almost unheard of in the US. Therefore, the Europeans have been all over this vehicle and there have been many first-drives and comparison reviews. I will cover the reviews from the larger media outlets.

Like the American press, the Europeans are raving about the Focus RS. The first-drive reviews are filled with amazing praise and very few complaints. Since the RS is on their home turf, they have been able to do a number of different comparison tests with many different vehicles. When Top Gear took the RS on a 2,000-mile drive through the snowy Alps, they claimed it was “The finest example of hot-hatchery to ever grace our planet”. They believe that Ford produced this car not for the best track numbers but instead for pure driving pleasure. Top Gear also compared the RS against the Golf R, Mercedes A45, and the Civic Type-R. They did not like the lack of traction the front-wheel drive Type-R had, they seemed bored by the refined Golf R, and the editors loved the A45, but loved the Focus RS even more. They did not even bother with the Audi RS3 calling it a “one-trick pony”.

Car Magazine took a slightly different and more interesting approach by comparing the Focus RS to the 718 Boxster and the M2 instead of it’s hot-hatch competitors. Their goal is to find the ultimate, fun-to-drive plaything. They were of course immensely impressed with both the M2 and Boxster but were astonished at how the cheaper family hot-hatch is not only able to keep up with these new sports cars but can provide just as much thrill as these rear-wheel drive fun-machines. Once again, the RS left another set of editors simply amazed.

Like all the other publications, Auto Express loves the Focus RS. They also tested it against the M2 but timed it around Llandow Circuit in Wales. The more powerful and the more expensive BMW M2 came in only a tenth of a second faster than the RS, basically a tie. Auto Express also compared the RS against the Audi RS3 and the Golf R. Like Car Magazine, they thought the RS3 only performed well in a straight line and they loved the Golf R, but mostly for everyday use. This test was for performance and driving thrills. The Focus RS won hands down in that category according to these editors. Once again, a huge victory for the RS.

Inside Lane compared the RS against the Civic Type-R around a track and on real roads. They loved qualities from both cars. They applauded the Type-R for its amazing lateral grip, light weight, lack of body roll, and Honda’s ability to put 306 hp to the front wheels without killing anyone. In dry conditions the editor said the Type-R was actually more of an enthusiast car because it handles a little better than the RS and with more driver involvement versus the all-wheel-drive system doing the work for you. However, as soon as road conditions worsen the abilities of the Type-R diminish quickly. Under wet conditions the all-wheel-drive Focus RS shines. Therefore, since the Focus RS can be a champion in wet and dry conditions, this editor gave the victory to the RS once again.

The biggest hot-hatch comparison ever on video was done by Auto Trader UK by comparing 9 hot-hatch rivals to the Focus RS. It went up against the Honda Civic Type-R, Audi RS3, Mercedes AMG A45, Volkswagen Golf R, Renault Sport Megane 275 Cup-S, Peugeot 308 GTI by Peugeot Sport 270, BMW 135i, Subaru Impreza WRX STI, and the Seat Leon Cupra 290. Even though the RS went up against the best hot-hatches in the world, the editors of this review still had this to say, “This car completely rewrites the hot-hatch rule book” and “The Focus RS is the finest hot-hatch money can buy” are just two of the amazing things said about the RS in this review. After a track test at the Anglesey Circuit in Wales, the editors narrowed down the field to just the Focus RS, Mercedes A45, and the Renault Sport Megane. The more expensive and powerful A45 was only one-tenth of a second faster than the RS, basically a tie. After driving the cars on the back roads extensively and getting the public’s opinion on the looks, the editors concluded that the Focus RS won but with the A45 a close second. They could not stop raving about how well-balanced and thrilling it is to drive. Their complaints were usually concerned with the usual cheap interior and high seating position. Other than that, they loved it!

What Can We Expect

The Americans and Europeans obviously loved the RS. It seems the RS has set the new hot-hatch bar for everyone else to try and reach. Once the Focus RS crosses the pond and is released to the American press, we can only expect more of the same praise during the first-drive reviews and can look forward to who they decide to compare it against and on what tracks. I have a feeling the RS will be breaking some hot-hatch track records, not to mention upsetting Subaru, Honda, and VW fanatics, as this car may be claiming its fame as the new king of hot-hatches!

Michael Cantu is a lifelong automotive enthusiast who has been researching, buying, selling, and working on cars since he was a kid. He have bought and sold almost 100 vehicles privately and over 150 professionally. In addition, Michael also have experience as a a service writer. He is a member of many automotive forums and clubs and am up to date on the latest automotive news and models. Auto-cross has been a love of his since he could drive. More importantly, he like to maintain and repair his own vehicles in my garage with fellow car enthusiasts. Michael aspires to drive, write about, record, and photograph cars for the rest of my life!