It has been a long wait since the early images appeared of the new RS at the Geneva Motor Show way back in early 2015. Much anticipation has been built up of the latest Ford to wear the famous RS badge and as we all know there has not been an RS that has disappointed. It is for this reason that so many Ford enthusiasts and even owners from other manufacturers jumped in with both feet and placed a deposit on the RS as early as January 2015. For us eager car nuts who want to get their hands on Ford’s latest creation it has been a frustrating journey. With only a handful of mk3 Focus RS models in the country to enable these purchasers and potential purchasers to see what they are actually buying. The car used in the UK tour is one of the early models which will only be visiting selected Ford dealerships of the selected few who are allowed to sell the RS, yes that is right only a selected number of Ford garages have permission to sell the Mark 3 variant!  The tour started off in the south of England travelled up North into Scotland visiting Edinburgh then our closest dealership Evans Halshaw in Glasgow so this was my chance at last to set eyes on the third version of the Focus RS before customer cars will start arriving in April. 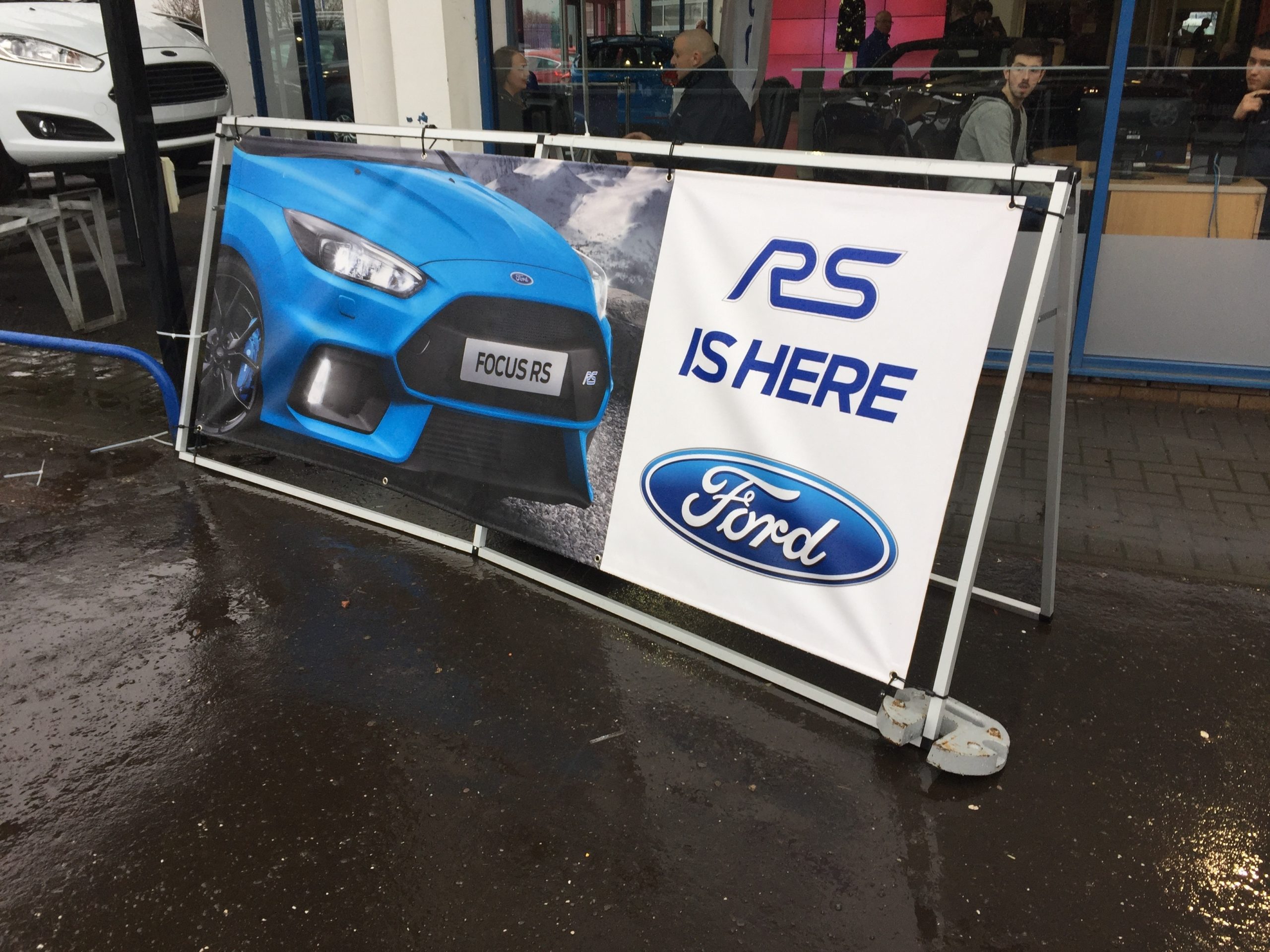 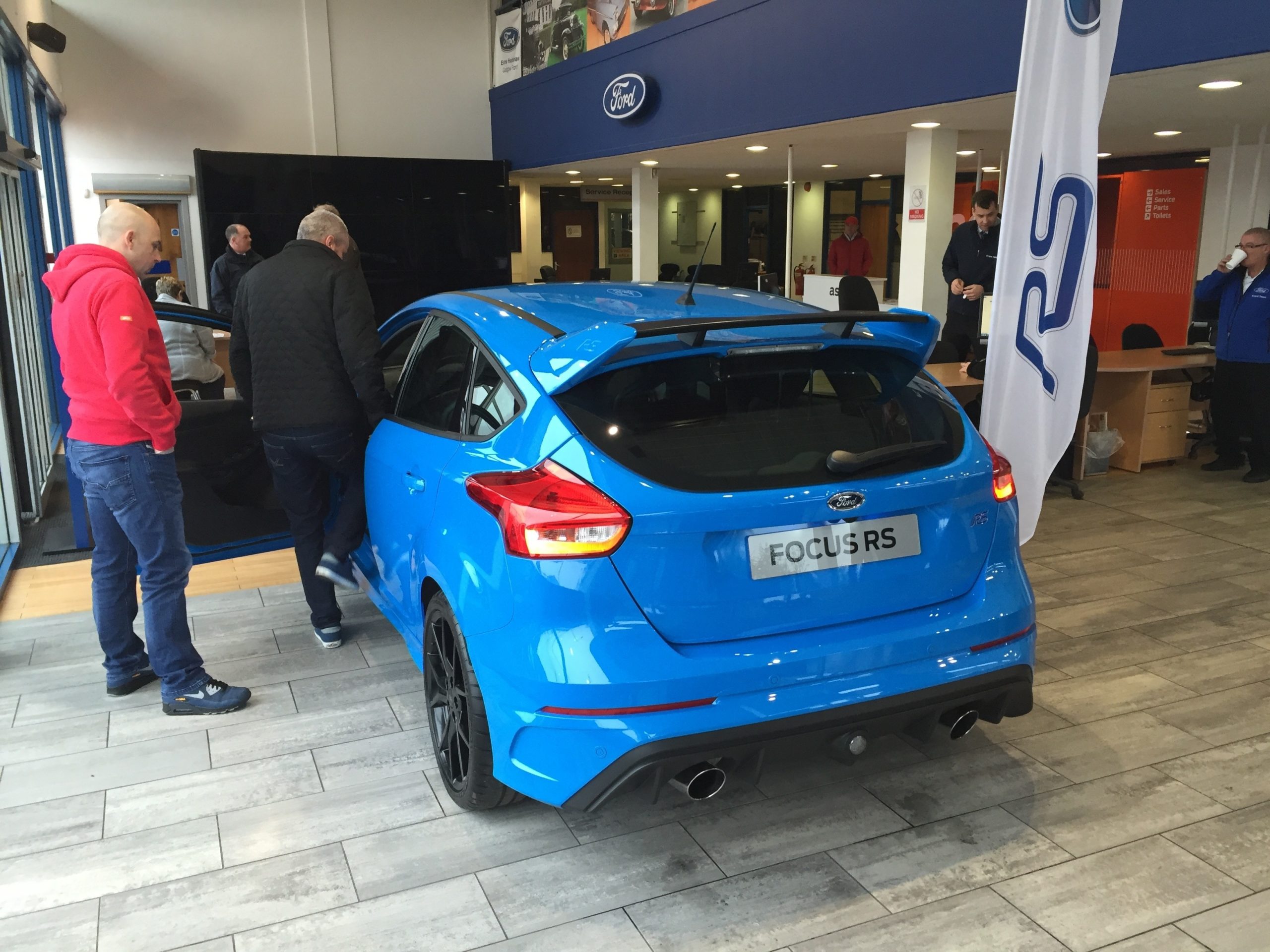 Capturing the ‘RS is here’ sign from a distance immediately increased the heart rate and could almost see it through the showroom I was getting so excited. It is probably a similar feeling you would get going on a first date with Cheryl Cole/Fernandez-Versini, you have seen the photos of her but you would be desperate to see her in the flesh to see if she meets your expectation. I was buzzing, it seemed liked years I had waited (oh it was over a year!) to see this car in the metal I just prayed it didn’t disappoint.

After parking up and proceeding to walk into the showroom there was a real atmosphere created by the car with everyones anticipation of popping their Mk3 Focus RS cherry. At first sight the car totally blew me away! The colour was phenomenal, it is just perfect for the car. It states ‘I’m special’. The photos definitely do not do the colour justice and you can immediately see what so many of the pre-orders have opted for the exclusive Nitrous Blue. The colour to me always appears quite flat in the photos but boy it was really a punchy blue with a subtle metallic fleck that glistens in the sunlight.

Speaking to the visitors on the day which was predominantly people that had already pre-ordered their car and simply wanted a closer look to see what they had spent their £30k on. People had traveled from Aberdeen and even Ireland to see the car up close and personal. As for feedback from the visitors I can honestly say there was not many negative comments if any, everyone was very positive about the car, full of complements but of course just extremely frustrated at the wait. I even suspect that seeing the car made the wait even more frustrating for many.

The majority of the visitors to the Ford dealership on the day were previous Focus RS owners meaning this is great news for Ford as they must be doing something right with their performance models to keep these car enthusiasts coming back again and again. All the guys and girls were having a good poke about the car, checking the Recaro shell seats where comfortable, sizing up the boot to make sure it would fit the wifes shopping in – you know all the priorities. Visitors were even lucky enough to get a listen to the exhaust with Ian from Ford’s events team happy to give the car good revving every few hours.

There have been rumblings from past and current mark 2 Focus RS owners that the newest version did not have the same physical road presence as the mark 2 and particularly disappointed that there is no 3 door version. I can totally understand that and would of loved to have seen a 3 door version but Ford have made their decision on that and it is one you will have to live with. The 5 door is more practical yes but many enthusiasts still prefer the look of the 3 door but please look beyond this aspect folks – the car has so much more to offer. As for presence the car had more than enough stature in the showroom even parked beside the Sixth Generation Mustang. The front and rear bumpers are very aggressive, the spoiler sits high up top pushing the car into the tarmac, the wide tyres, bold alloys and big brakes all give out the signals –  this is a fast car. The only real other negative comments were from journalists during the Valencia Media Drive stating the interior quality was sub-standard. Now I know the latest Focus RS is no Aston Martin inside but to me I still think Ford have moved it on a level inside the cabin and to be perfectly honest would I want a hand-stitched leather dashboard or would I want a super duper trick 4WD system with drift button?! I much prefer Ford have used their development time and budget making the driver experience more involving and excitable than splashing cash on any sort of fancy chrome buttons.

Did you know?
The actual car that is touring the showrooms (pictured) is only a 2WD version and will be crushed after the tour and it was an early prototype and not road legal. Eek! 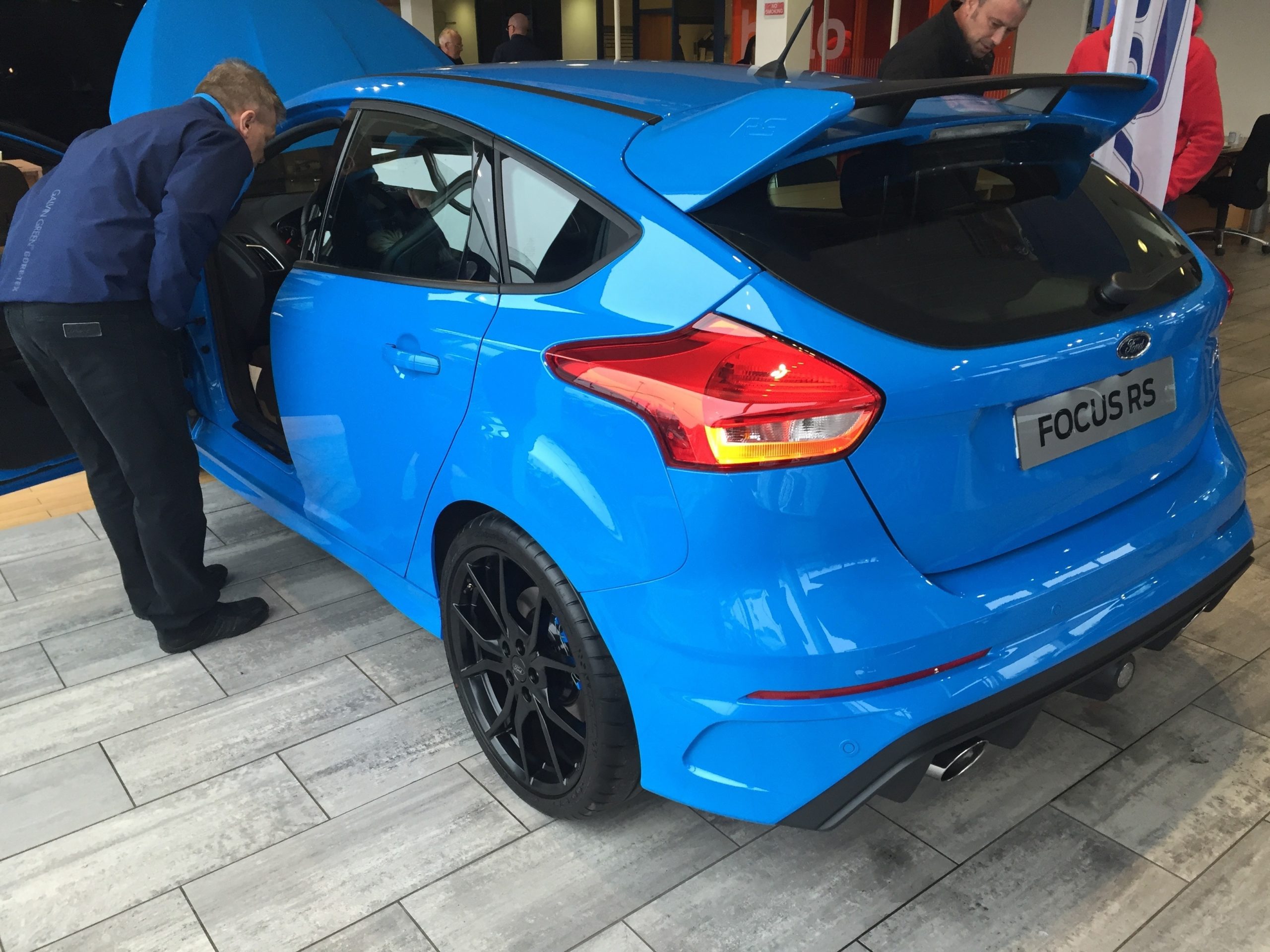 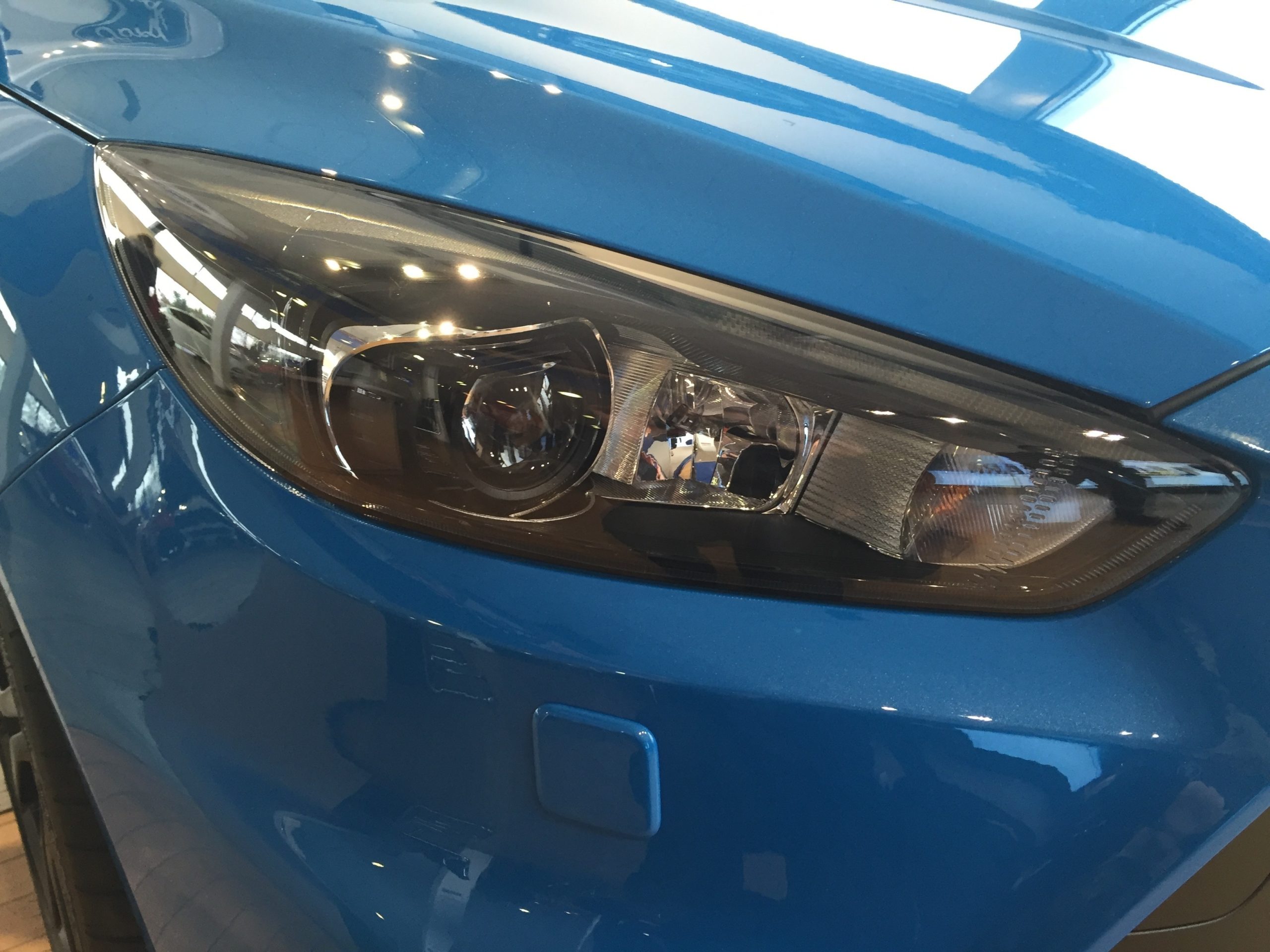 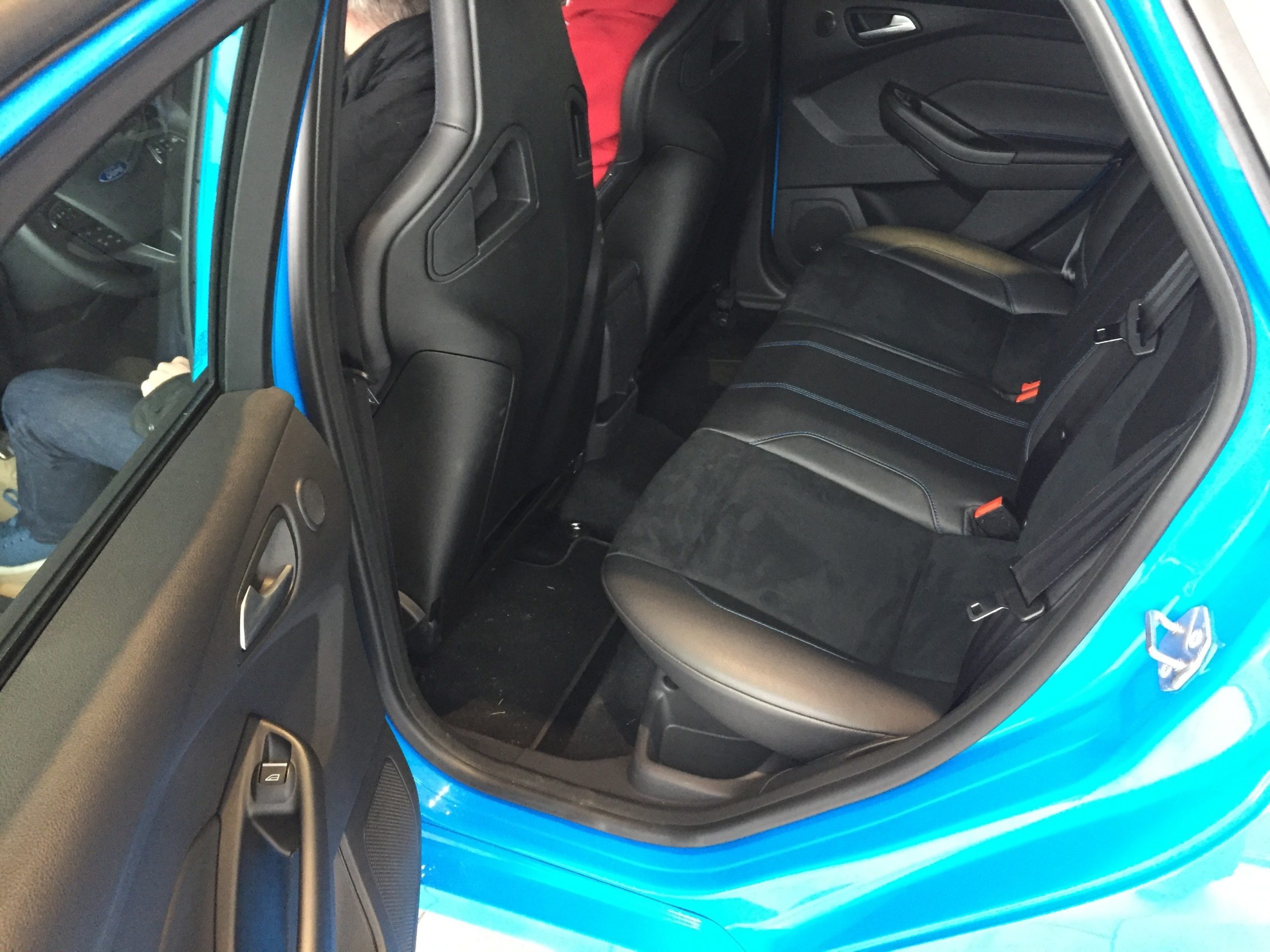 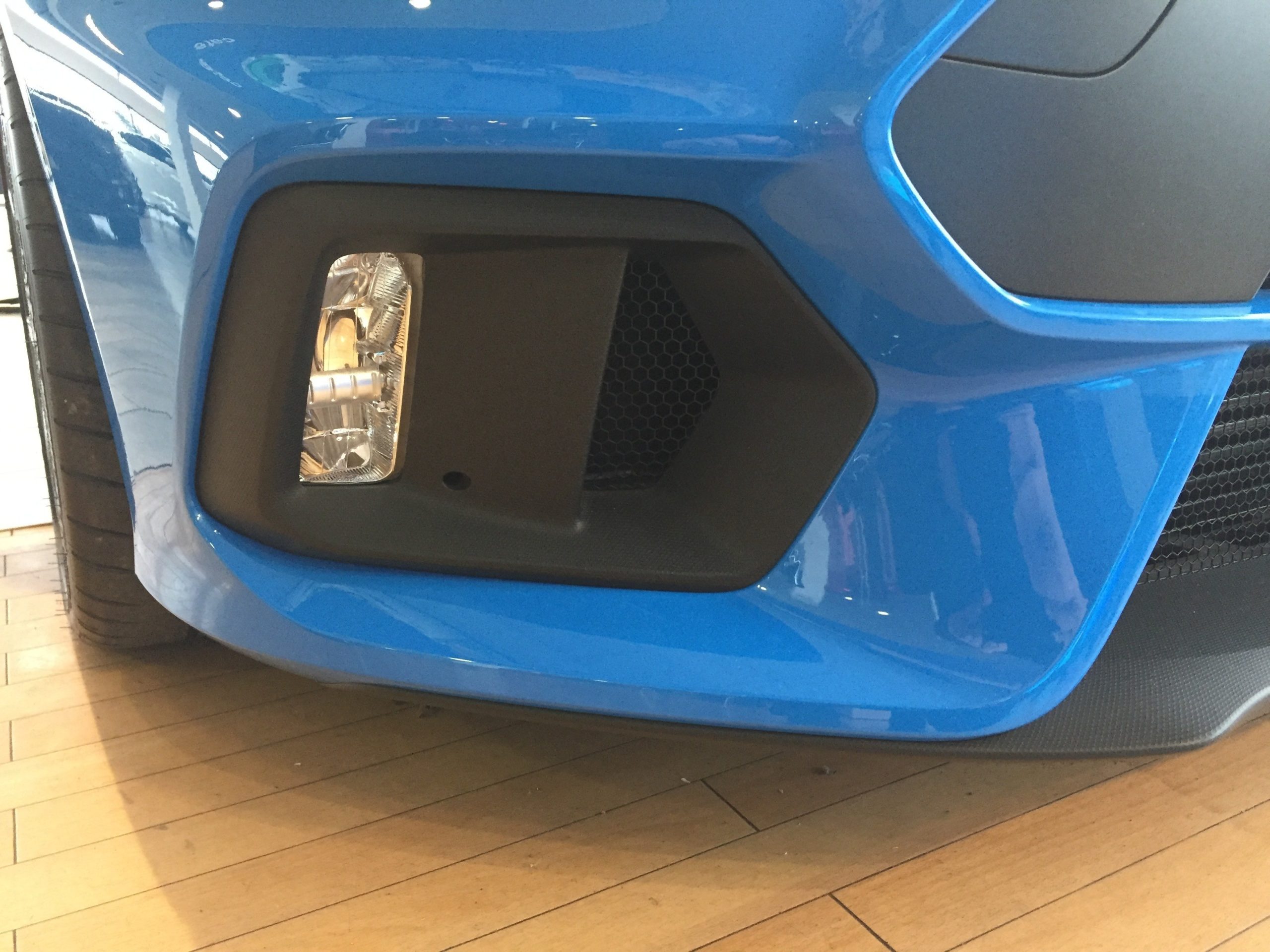 The 2016 Focus RS has already had a huge following with over 2500+ pre-orders without even driving the car but these lucky people are sleeping better at night after the media reported back with many 5 star reviews which have put everyones mind at rest this car will be worth the wait. Demo cars are expected in the showroom Spring 2016 meaning there will be many making another trip to Evans Halshaw in Glasgow to get a proper taste of what this car can do on the road.