Revo are no strangers to tuning fast Ford’s so it was no surprise to hear they have been busy beavering away – fiddling and poking around the Mk3 Focus RS standard ECU to see what gains could be had. Having access to the Revo development 2.3 Mustang for over 6 months had given their calibration engineers the perfect basis to work from as their engines share alot of similarities.

Testing facilities at the Revo UK Headquarters and US Development Facility, as well as a track office at Bruntingthorpe Proving Ground, means that Revo are able to test their products extensively on and off track and managed to rack up over 5000 development miles in the process. Testing products in this way is paramount to ensure that along with more useable power and torque comes refined drive-ability, something often overlooked.

Revo don’t just plugin their laptop, add 10% to everything and call it a day they have spent over three months development on track and road honing it week in week out. Even after they think its ready they send the software out to their global Authorised Dealer network for beta testing which allows them to test performance and longevity in countries with varying temperatures, fuel qualities, climates and altitudes to offer a product that performs. 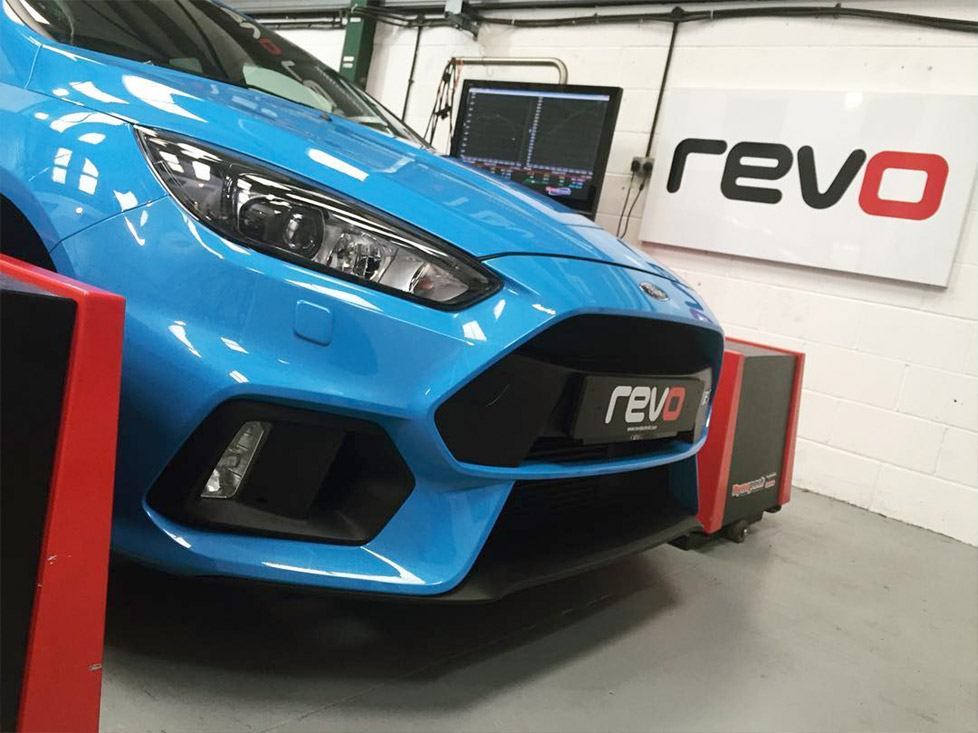 The highly anticapted Revo Mk3 Focus RS Stage 1 remap will be released to eager RS owners from the 15th August 2016 but I was one of the privileged few to be able to get a chance to experience REVO’s hard work before its offical release. 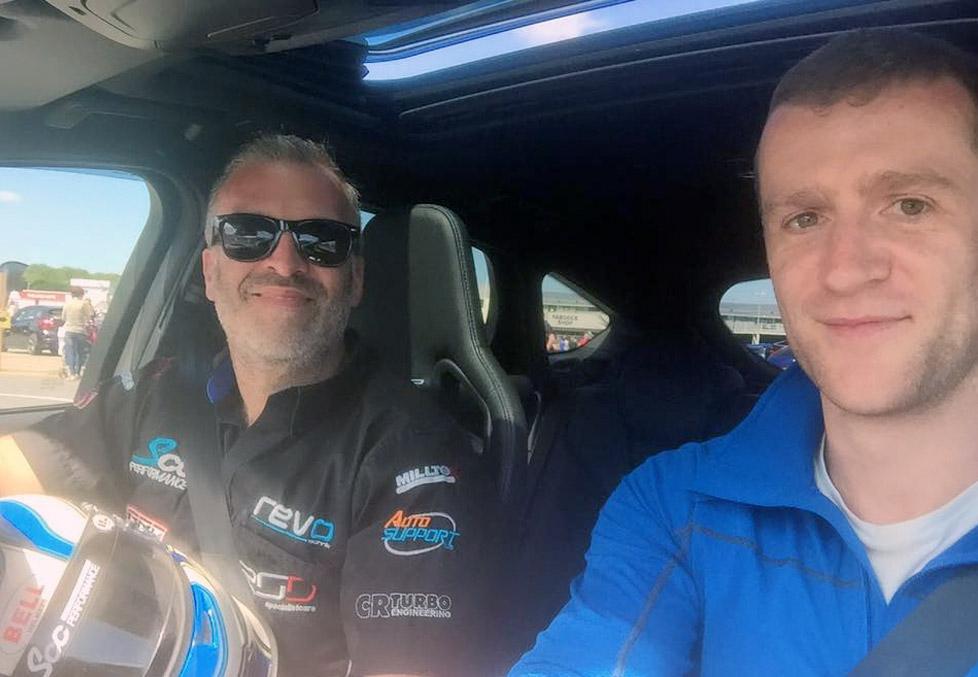 Unfortunately I wasn’t able to drive the car however Rob from SCC Performance done a much MUCH better job than I could have done anyway. The test drive was during the Revo track session at Ford Fair which gave the ideal opportunity to unleash the full potential of the car. ‘Track’ mode on… lets do this!

Now having only driven the Mk3 Focus RS once prior on the road it is difficult to compare like for like but immediately upon Rob’s first blip of the throttle as we exited the pits the power came in instantly and I was pushed back into the Recaro shell seat. The standard car is not particularly laggy however this Stage 1 remap just seems to have given the RS a large dose of urgency. When you tend to bolt on upgrades like exhausts and induction kits you can marginally notice the slight increase in performance where with a remap so many more parameters can be altered to give you gains and this is what Revo have delivered.

In every gear the power was there ready to go and as Rob asked for more with his right boot the Ecoboost 2.3 just kept delivering. The car was literally flying round the track, passing other Mk3 RS’s, Mk2 RS’s, Fiesta turbos with absolute ease. Out of the corners the car now had that punch and kick you expect from an RS marque. The response from the engine was instant as if it had lost a few hundred kilos but it was just down to the difference in the way Revo was bringing in the power and torque.

The Revo software upgrade brings in the power so much lower down the rev range than standard meaning the car becomes much more driveable.

Even when Rob switched to drift mode for some fun laps the car was just screaming to go (or was that the tyres). At the end of the 20 minute session Rob mentioned how easy it was to drive on the limit – no aching arms or sore backs, no sweat dripping off the forehead it just seemed like a trip to the local Tesco for him.

In every gear the power was there ready to go and as Rob asked for more with his right boot the Ecoboost 2.3 just kept delivering.

Apart from the Milltek cat back exhaust system the REVO Stage 1 remap software was the only power upgrades on the car but what a difference it made – the RS has been woken up!

From speaking to Revo’s head calibration engineer Peter it was clear just what potential the Stage 1 had as the standard map on the Focus RS is lets just say ‘had room for potential’. Looking at the peak figures you may think this remap just gives you an extra 30bhp over the standard car however lets look a little closer and particularly at the power graph. Yes there is a peak gain of 30bhp at the top end but look at the mid range this is where Peter was able extract up to 60bhp (@6400rpm) and 85lbft (@2500rpm), these are major jumps and immediately noticable. This is why I instantly felt a difference from the passenger seat when Rob jumped on the throttle entering the circuit we had way more torque and power than the standard car! 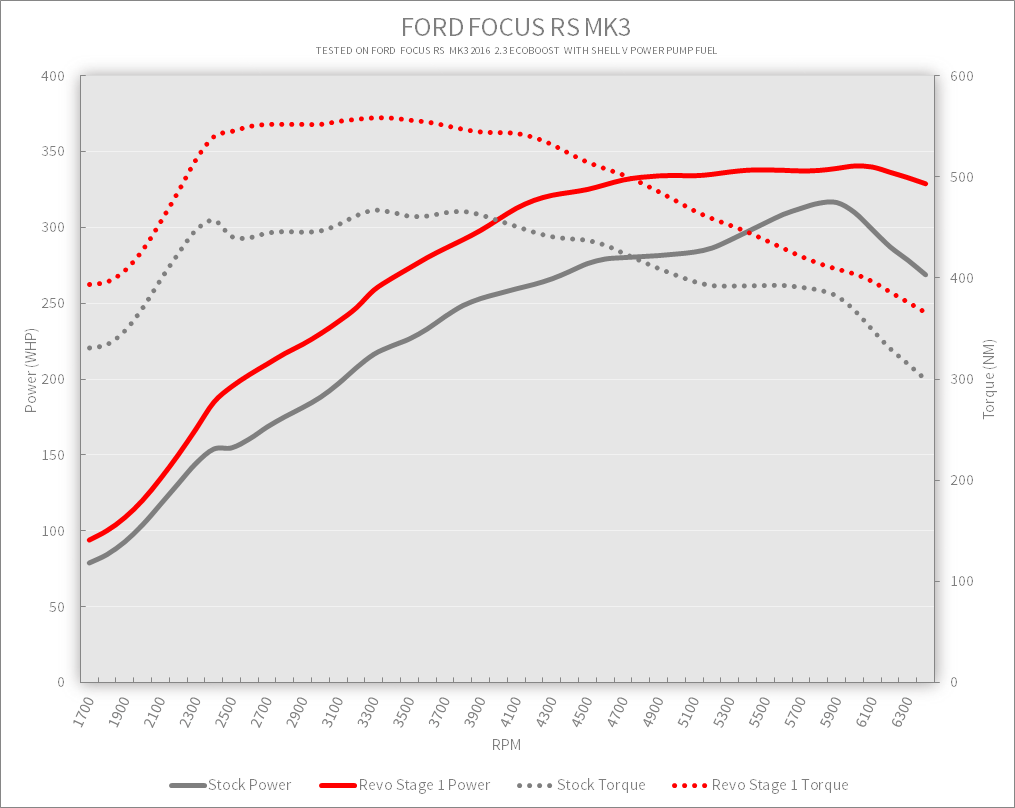 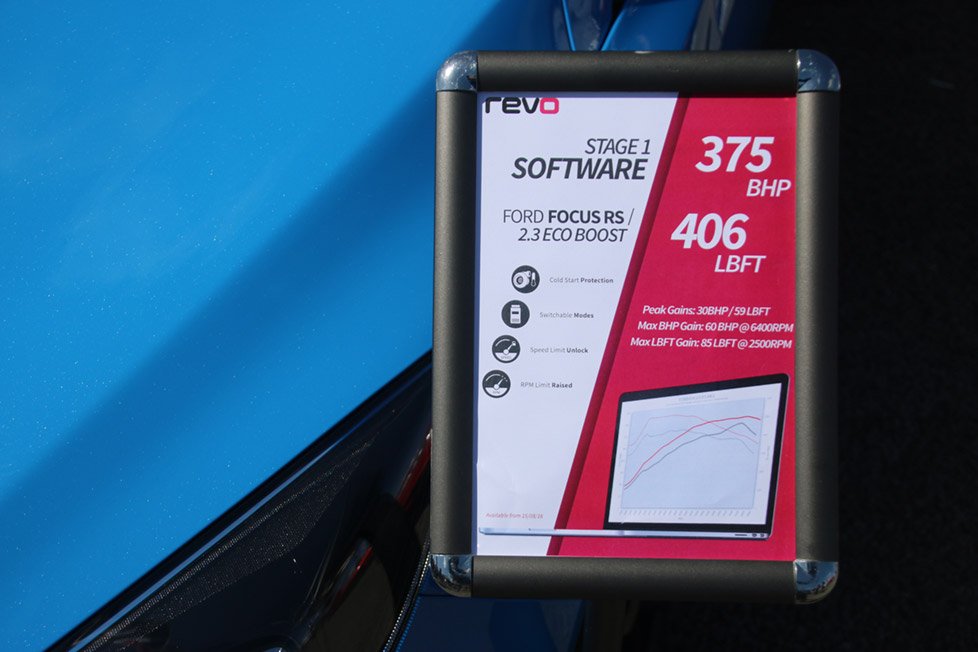 The Revo Stage 1 software has transformed the Focus RS there is no doubts about that. By enhancing the boost throughout the rev-range, smoother delivery of power is achieved on demand in each gear allowing more control over throttle input giving a better overall driving experience. Revo didn’t stop there – they have also raised the RPM limit, removed the speed limiter and optimised the shift lift indicators for the extended rev range. Other neat enhancements the Revo calibration team have introduced is additional safety features including cold start protection which limits power until the oil is up to operating temperature and extensive exhaust gas temperature (EGT) monitoring to ensure engine longevity.

There is no denying that Ford cannot make the best of the mapping of the car as standard due to so many regulations to adhere to, therefore in standard form the car is like a boxer with one arm tied behind his back. The RS has so much more to offer.

To gain this kind of performance increase from a software update (Revo or not) I would recommend budgeting a remap for your next upgrade!

All in all this is a fantastic package which brings the Mk3 Focus RS to where is should of been when it left the factory. What about Stage 2 I hear you say, well all going well that should be out later in the year.